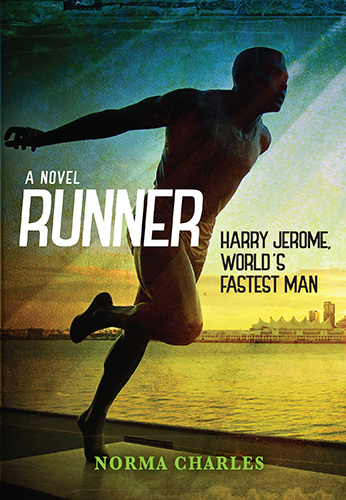 When I was younger, I always wanted to know more about the person my school was named after (which required a lot of research since I went to a lot of schools). How did someone get a building or a street or an event named after them, anyway? At some point, I stopped wondering. Possibly because the stories behind them never seemed that interesting or inspiring. Enter Harry Jerome, who has a sports complex, a recreation centre and even an international track event named after him. Harry’s life is not only interesting and inspiring, his story is told in an engaging way in Norma Charles’ new book for middle grade readers.

Written as a novel but informed by extensive research, the author’s brief acquaintance with Harry, and interviews with his sister, coach and friend, Runner begins with a flood in Harry’s home of St. Boniface, Manitoba in 1950 when Harry was 9-years-old. From there, it follows the family to North Vancouver, BC where they faced racism as the only black family in a white neighbourhood. Harry’s love of sport – from baseball to soccer to basketball and volleyball – got him through these rough years as he cared for his younger sisters and made money through a paper route.

Near the end of high school, Harry found track and field and started training with Optimists Striders track club at the Brockton Oval in Stanley Park. As he began breaking records and winning races in relay, 100-yard, and 200-yard sprints, he found himself being admired rather than shunned for the first time in his life. Harry was on his way from being Canada’s fastest runner to a gold medal winner at the Olympics in Rome when he pulled his leg muscle in the 100-meter semi-final at the age of nineteen.

Following the Cub Scout motto “always try your best”, Harry went on to attend the University of Oregon on a full athletic scholarship. He continued breaking records until he became the first man to hold world records in both 100-meter and 100-yard sprint. Since I’ve already given away most of the story, you’ll have to read Runner to find out if he got a second chance to win gold or rectified his image with reporters.

Regardless of the ending, Harry Jerome is a person worth knowing about. This straightforward book puts the spotlight on a time and place in history, shows what it takes to be a high-level athlete, and explores how childhood influences the person you become. A quick read. Highly recommended.