Title: Before the World Was Ready: Stories of Daring Genius in Science 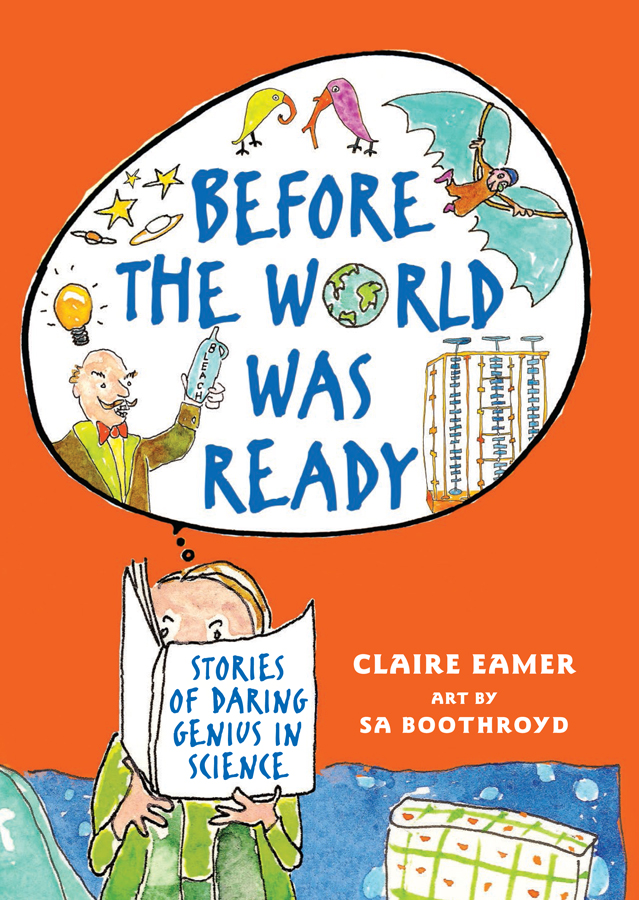 This new offering from science writer Claire Eamer is truly revolutionary – and I don’t use the term lightly! Delving into the science of eight different subjects, Before the World was Ready  focuses on the people and thought process behind discovery and invention, encouraging middle grade readers to become the next generation of trail breakers.

The scientists featured in the book were all ahead of their time – thinking outside the box before such cliche terms even existed.  In some cases, the world wasn’t ready for their ideas because they challenged the status quo and beliefs of the time.  There’s Copernicus, who’s ideas about the world not being the centre of the universe went against the teachings of the Church.  There’s Semmelweis, who inconvenienced doctors by suggesting they wash their hands to avoid the spread of germs.  And there’s Rachel Carson who spoke out against DDT and started the modern environmental movement.

In other cases, the world wasn’t ready because the knowledge or resources necessary to make an invention work did not yet exist.  This is true of the first airplanes, built by Sir George Cayley before the combustion engine had been developed.  It is also true of the earliest computers, first imagined by Babbage, using machinery because electricity was not yet available.

The information in this book is well written and nicely presented.   Water colour pictures infuse humour.  Colourful backdrops, headings, and borders make is visually appealing.  Sidebars providing extra information allow readers to go into more depth (or not) while at the same time allowing the author to complete the picture – it is very rare that one, single person was the first to come up with an idea. Eamer also uses this opportunity to feature women such as Ada Lovelace – daughter of the poet Lord Byron – a mathematician who helped develop the analytical engine in the 1820s, an early form of the computer. A welcome addition to a history dominated by men.

Eamer’s conclusion encourages readers to think about trail breakers and trail blockers, using the example of climate change.  It is the perfect ending to a book that combines science, history, anthropology, and psychology.  A must have for every library, classroom, and personal collection.

Find out more about this book and others in my interview with Claire Eamer at the Mixed-up Files.