Title: To Night Owl From Dogfish 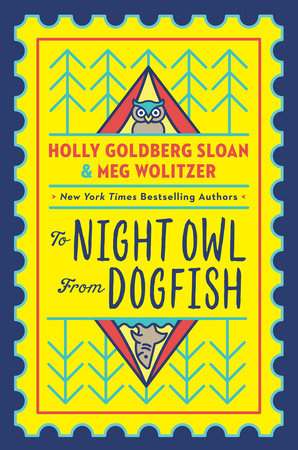 I have always liked books told through correspondence. Once of my favorite books of all time is The Guernsey Literary and Potato Peel Pie Society. (Yes, the movie is good but the book is much, much better). I tried incorporating letters into my historic middle grade novel Twisted Fate, staring  Rosalind Franklin, but it was a struggle – that book is either “in the drawer” or a “work in progress” depending on my current mood. There aren’t many middle grade books I can think of that do this well, until… now.

To Night Owl From Dogfish starts off as email correspondence between two wildly different 12-year-olds that live on opposite sides of the United States. Avery and Bett’s dads have started dating and want them to go to the same summer camp. The girls are strongly against this but as they get to know each other, things change. And once they do go to camp together (spoiler alert!) the correspondence changes too. This is why it works – bestselling authors Holly Goldberg Sloan & Meg Wolitzer never waver from the correspondence-style but as things progress they add letters, texts, emails between different characters, and even some formal written reports to move the plot along.

The book covers two summers and more than a year in the life of Avery (Night Owl) and Bett (Dogfish). A lot changes and there are more than a few twists a long the way. Every character in the book is nuanced and unique and since we get to read correspondence from them in their own words (even the camp counsellor and the bully), the reader really feels like they know each one. (Gaga – Bett’s grandma – was my favorite.) The fact that To Night Owl From Dogfish is written by two different authors likely helped ensure that the main characters, in particular, are different and completely fleshed out.

One of my 13-year-old sons (13 – how did that happen?) tried reading this book but found it difficult to follow the emails back and forth. I was surprised – I thought the format was ingenious and engaging. His twin brother didn’t even crack the cover. He’s more interested in non-fiction and doesn’t like anything to do with camping. Still, I was surprised (my kids never fail to surprise me) – I thought the front cover (and subject matter) would attract a variety of readers. In a way, our different opinions on To Night Owl From Dogfish support the book’s theme, which I’ll sum up with two quotes from the wedding speech at the end of the book: