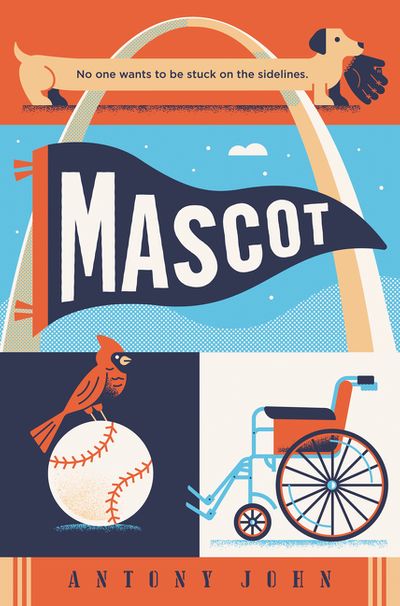 I’m a little late reviewing (and reading) this 2018 title. Not sure how I missed it, especially since I’ve been focused on recently published middle grade books about baseball. Thank goodness for holiday libraries!

Mascot introduces readers to Noah Savino five months after a car accident that killed his father and put him in a wheelchair. A former little league catcher, the spinal cord injury doesn’t just change Noah physically. It changes his relationship with his peers and his mother and leaves him with a bitter outlook on life.

The book isn’t really about baseball. Noah talks about being a catcher, particularly in reference to his nemesis, who Noah and his friends challenge to a pitching/hitting competition. The St Louis Cardinals also play a role, mainly in Noah’s memories of his father and the mystery of whether his mom’s new friend is actually the team’s mascot. But overall, Mascot is really about Noah mourning the loss of his father and adapting to his new life.

The characterization’s a bit over the top, especially the two VERY mature 9-year-olds. I also found the dialogue between Noah and his friends (and the bully) unrealistic for 12-year-olds. It reminded me of the Gilmore Girls – the banter between them was too clever to be real but that didn’t stop me from enjoying the show. And these little things won’t stop middle graders from loving this book.