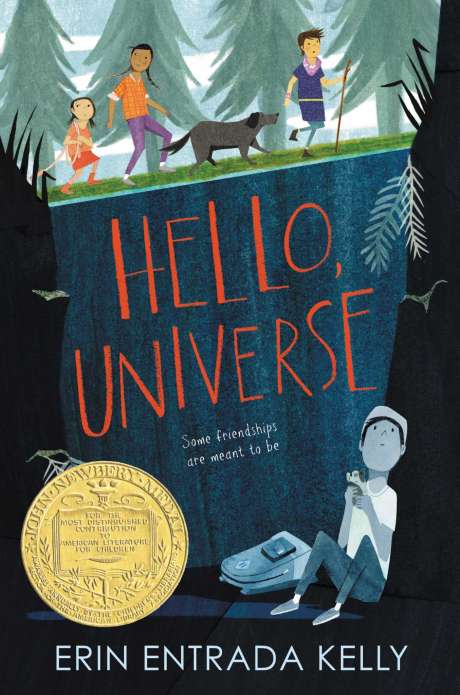 This book starts slowly. My 12-year-old son gave up after ten pages because he was confused. If it hadn’t been a Newbery winner, I might’ve given up myself. I’m glad I didn’t because half way through, there is a shocking twist that is somewhat foreshadowed by the cover art but still took me totally by surprise. After that, I could not put the book down (and even convinced my 12-year-old to give it another go).

In retrospect, the story gets off to a slow and confusing start because it is told from the point of view of four different characters (one in first person, the rest in third). The author does a fabulous job of creating four nuanced, unique and diverse characters. This takes time and it pays off in the end as each character gets their own fairly complete arc.

The weakest character is the bully, Chet. He doesn’t change much through the course of the book but the reader does get some insight into why he is the way he is (and he is really awful). Kaori doesn’t change much either but she does put her psychic skills to good use, makes a friend/potential business partner, and provides some much needed levity (as does her sister). Virgil, who’s called “turtle” by his family because he’s so timid, shy and quiet, changes in a predictable way but I liked that he wasn’t immediately transformed by his life threatening experience. My favourite character, Valencia, is realistically portrayed as someone with a hearing loss. Through the story, she realizes how lonely she is and takes some huge steps toward fixing it but does not resolve her relationship with her mother.

Not every character evolves and not every problem gets resolved, which prevents the novel’s plot from getting tied up a little too nicely. I know I’m being vague about the story itself but I really don’t want to give too much away. The entire book takes place in the first few days of summer holidays after the four main characters finish 6th grade. There are not a lot of big plot points but the one big event is enough to set a lot of things in motion. Hello,Universe is a character driven novel with a lot of heart. It did not quite live up to my high expectations after winning the Newbery but I think it would be a great classroom read aloud.