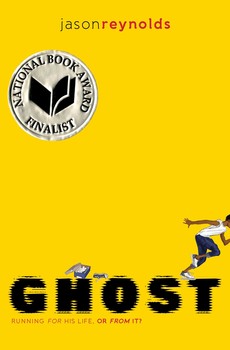 Well, I knew this book would be good – it was a National Book Award Finalist for Young People’s Literature, after all –  but I didn’t expect it to be as good as it is. Suitable for grades five and up, Ghost is about 7th grader Castle Cranshaw (who nicknamed himself Ghost after the way he looked the night his dad chased him and his mom out of the house with a gun). No doubt, Ghost has a tough life and makes some bad choices but Jason Reynolds handles the issues with the perfect amount of sensitivity and empathy for a middle grade audience.

Over a one week period, Ghost discovers his natural talent for running, joins a track team and befriends the coach. The book then skips ahead a few weeks to show how Ghost has bonded with his teammates and must pay the consequence of shoplifting. The story ends with him competing in this first race.

It might sound like a sports story cliche but Reynolds takes it to the next level with an amazing cast of characters. Ghost is flawed but extremely likeable and easy to cheer for (even when stealing and beating up the school bully). He has a good relationship with his hard-working mom and Mr. Charles who owns the store where Ghost buys his sunflower seeds. Coach is the typical ‘I see potential in you’ father figure that Ghost needs but has his own unique backstory as well. And the other newbies on the team – Lu who has albinism, Sunny who lost his mom, and Patty who’s adopted – are all interesting enough to warrant their own stories, which is what I’m going to read next (along with everything else that Jason Reynolds has ever written).