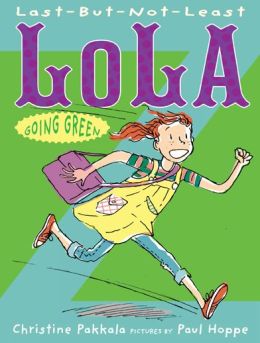 Move over Junie B. Jones, there’s a new (slightly older) girl in town.  Lola Zuckerman is in Mrs. D’s second grade class, which is a bit of a problem since Mrs. D loves doing things in alphabetical order and Lola hates going last.  Lola also hates change – producing another set of problems when her best friend and classmate (Amanda Anderson) moves to another neighbourhood, her grammy and grampy return to Texas, and her mother starts a new dress making business.

But Lola, who is as feisty and loveable as Junie B. (but not as annoying) finds a way to get through it, starting with a victory in the class “Going Green” project.  Making compost is not as easy as it sounds, of course, especially in a class full of garbage hating girls, lead by a teacher with a phobia of worms.

Lola Going Green is laid out nicely, with several black and white sketches and a delicate, shadowed leaf pattern stamped on the corner of some pages.  The writing is smooth, the characters are all likeable and realistic, and the pace is perfect.  The ending was a little too neat and tidy, wrapping up all the loose ends in the final chapters, something that will appeal to the target audience (but maybe not more cynical adult readers).

Last-But-Not-Least lends itself perfectly to a series, and everyone in my family is looking forward to book two, Lola and the Wild Chicken.  In the meantime, my seven year-old wants to read Lola Going Green – again.