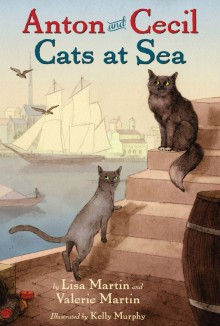 Anton and Cecil may be cats, but as brothers they have a relationship that many humans understand. As different as two cats can be, they are bound by the life they share in a Nova Scotia harbor.  But neither understand the other at all. Cecil, always the first cat out on the docks in the morning, likes adventure and spends his days sailing the fishing schooners as a mouser, welcomed aboard by the crew because of his lucky black fur.  Anton, the smaller, timid, grey colored brother, is a picky eater who spends his days asleep and his nights at the saloon, enjoying the shanties.

Everything changes when Anton gets taken captive by the captain of a tall ship.  Cecil finds out too late and can not get aboard in time to save his brother (or even keep him company.)  At his mother’s request, Cecil sneaks onto a clipper and sets off in search of Anton.  The rest of the story is told from the alternating view of Anton and Cecil as they sail the seas: jumping ships, escaping storms, getting marooned on desert islands, and cavorting with pirates.

Their search for one another is aided by a collection of animals they meet along the way including a dolphin who laughs “like raindrops drumming on glass” and a talkative mouse named Hieronymus.  Anton and Cecil learn of an old cat tale about a cat spirit who works with an old creature of the sea to watch over lost cats. “Where the eye sees the eye, the lost shall be found” is the saying that goes with the legend and a mystic cat eye appears in the clouds and mist to guide them both.

This book will appeal strongly to fans of the Warriors series.  As part of the school curriculum, many reading activities could be easily incorporated as such as the identification of ship parts, types of ships, pirate lingo, etc.  Anton and Cecil is a grand tale on the high seas and I was sorry to reach the end of their adventure. But glad that it brought them home.